This summer I seem intent on making up for my previous lack of gallery submissions.  Last Friday I dropped off my second set of exhibition pieces, this time to the Historic Sites Association for consideration in their gallery show opening today.  I opted to go with three pieces in argentium and sterling silver that highlight the beauty and versatilty of Viking style wire knitting. 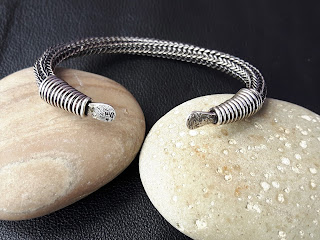 The first piece I submitted is called Shield Maiden's Cuff.

Its story:  There are those who assert that there is archeological, historical and literary evidence supporting the existence of warrior women within Norse culture. Others suggest while there may have been a few women warriors that much of the literary evidence is unreliable and was more concerned about myth-making than accuracy. Despite the debate, the image of the shield maiden has been burned into modern consciousness thanks to the HBO series “Vikings” and the wonderful character, Lagertha.

The Shield Maiden’s Cuff is my imagining of the type of bracelet someone like Lagertha might have worn. It is a sturdy design, with a sleeve of Viking wire knitting in 26 gauge sterling silver pulled over a heavy 10 gauge sterling silver core. The bracelet ends have been finished with handmade cones and accented with texturing. The cuff has been antiqued and then polished giving it the look of a piece worn every day, even into battle!" 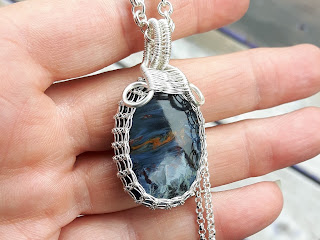 Its story:  Introducing "Storm's Coming ", the latest addition to the Story Pendant Collection. Sterling and argentium silver, a Pietersite cabochon and Aquamarine beads capture the beauty and power of a looming storm.

Margaret walked the headlands, eyes scanning the horizon, searching for her family's boat. "Storm's coming," she whispered to herself, feeling the wind's gathering strength. Margaret squinted to see through the looming darkness and spotted a small boat. "They're back!" she exclaimed aloud. Relieved, she turned back towards her home. She'd have hot tea and molasses bread ready soon enough.

The third piece also features Viking style wire knitting as a setting for a cabochon. I love how the stitching just pops against the black onyx. 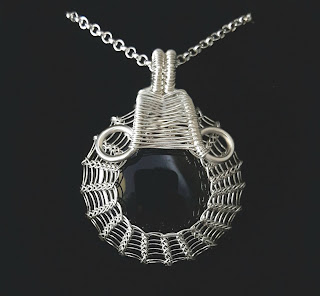 Its story:  While the sheer mass of a blue whale clearly makes it the largest mammal in the ocean, tales of giant and colossal squid and krakens taking on mythical proportions are more common than you’d think.

The word “kraken” comes from the Norewegian “krake” which is associated with an unhealthy, twisted animal.  Tales of the kraken appeared in a late 13th century version of the Orvarr-Odrr Saga, on a journey to Helluland (Baffin Island) across the Greenland Sea. The protagonist encounters two sea beasts, one named “Hafgufa”.  According to the saga:  “It is the nature of this creature to swallow men and ships, and even whales and everything else within reach.”

The giant and colossal squids are deep sea creatures, and tend to be found near continental and island slopes of the North Atlantic. Illustrations of these almost mythical creatures feature large, dark round eyes.

Introducing, the Eye of the Kraken, the latest addition to the L’Anse Aux Meadows Collection. Black as the depths where the kraken lives, a cabochon of black onyx has been set in a “socket” of Viking wire knitting in argentium silver, and suspended on a sterling silver chain.

These pieces will be available for sale through the Historic Sites Association. The gallery will be open from Wednesdays to Sundays, 11 a.m. to 5 p.m. until August 26, 2018. 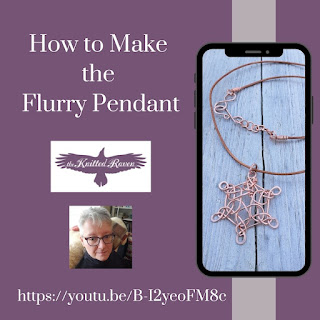 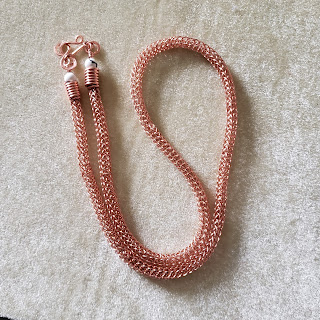 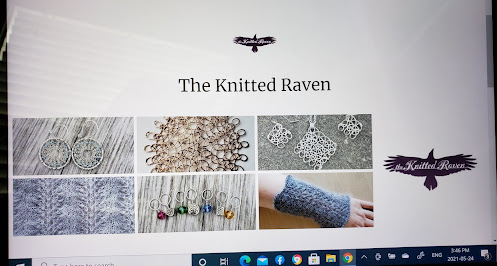